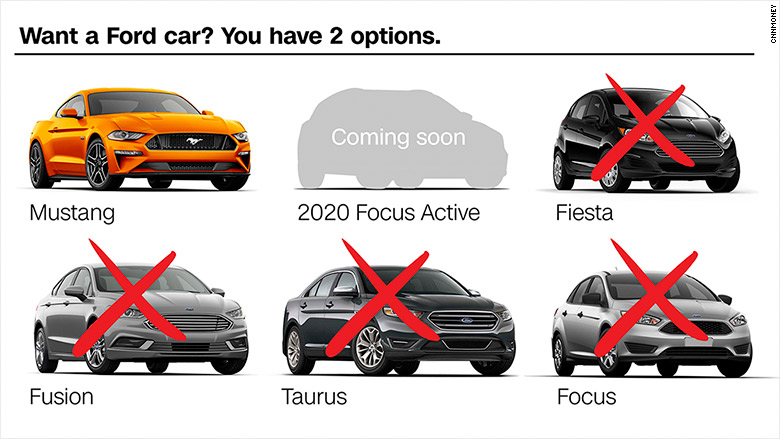 Henry Ford must be rolling over in his grave. Ford announced this week they will stop the production and sale of 5 cars brands in the North American market (Taurus, Fiesta, Focus, Fiesta, C-Max), leaving only further development of the Mustang and importing the Focus Active from China. Ford‘s North American showrooms be filled with pickup trucks, SUV’s, and vans.

Also disappearing will be hundreds of manufacturing jobs in the US, Canada, and Mexico as Ford shifts towards larger and more profitable vehicles.

Ford has not made any announcements for Europe where they have several underperforming cars models, but they also don’t sell many larger vehicles either.

Ford’s announcement that it will phase out most of its car models by 2020 is not quite as drastic, but the impetus is the same: It’s much better to do one thing really well than it is to try to be all things to all people. All the top-selling sedans in America—the Toyota Camry, Honda Civic, Honda Accord, Toyota Corolla, Nissan Altima, and Nissan Sentra—are Japanese. Ford could try to compete with those, but to what end? Over many decades it has learned that it’s not going to build a category-killing sedan.

What’s more, even if Ford did manage, against all odds, to build a car that outsold the Camry, it would be able to do so only with the slimmest of profit margins. The investment would be huge, while the payoff would be minimal.

Meanwhile, the Ford F-series has been the top-selling truck in America for 41 years. The company sells a new F-series pickup truck every 42 seconds, at an average price of $49,439. The franchise is a license to print money: Each truck, it’s been estimated, nets Ford more than $13,000.

A business that makes nothing but money is a poor business.

Larry Harvey, the man behind ‘radical self-expression’ at Burning Man, has died at 70

They change their climate, not their soul, who rush across the sea.