The Norwegian Automobile Federation (NAF) has tested the range and charge time of popular electric vehicles in winter conditions. 20 vehicles were driven until they stopped completely and shut down, to measure their real world range.

NAF collected 20 of the best-selling electric car models you can buy from Norwegian dealerships as of January 2020.

The test focused on range, consumption and charging time. To test all the cars equally, the test drive was performed without preheating of neither cabin nor battery. All cars drove the same route on the same day, with similar style of driving, and climate control settings.

The test route consisted of city driving, highways and country roads in speeds from 60 kmh (37 mph) to 110 kmh (68 mph). All the cars had one climb through a mountain pass. The longest running cars climbed two mountain passes.

See the full results of the test at the NAF site, including test results for each individual car.

The tests started in Oslo and ended in Hafjell, which is normally a 200 km (124 mi) journey, but the evaluation extended that route to 482 km (300 mi) to cope with the cars with more range. They went through city and highway driving and at least a mountain pass. Speeds ranged from 60 km/h (37 mph) to 110 km/h (68 mph). The idea was to run the EVs until the battery was completely discharged.

NAF also performed a charging test from around 10 percent to a minimum of 80 percent of charge. It was conducted at -2ºC (28.4ºF), and all cars were driving for at least two hours to ensure their batteries were warm.

The first thing the association discovered was that the tested EVs present around 18.5 percent less range than their manufacturers state on WLTP. The worst one was in this was the Opel Ampera-e, a car that you are more used to calling Chevy Bolt. With a WLTP range of 423 km, it managed to run only 296.9 km, or 29.81 percent less.  […]

The entry level VW ID.1 city car would be smaller than the ID.3 pictured above.

Ralf Brandstätter, head of the Volkswagen brand, told the UK’s CAR magazine that the VW ID.1 is in development and that it would become the smallest and least expensive of VW’s ID-branded electric vehicle lineup.

In fact, its aim of selling a million EVs a year by 2025 has been brought forward to 2023. Boss Ralf Brandstätter says MEB-based cars can be 40% cheaper to build than EVs based on conventional chassis.

The head of the Volkswagen brand told CAR magazine: ‘In future, it will make no sense putting battery cells in a car designed for an engine as we have done with [2020’s updated] e-Up – that was a stepping-stone project. We are working on a BEV below €20,000 (£17,600) – we can shrink the MEB architecture with less content to get the cost down.’

The ID.1 will be the smallest ID in an electric line-up built around seven main models. The next one up, the ID.2, will be VW’s rival to the Renault Zoe and Peugeot e-208. A high-performance R version of the ID.3 hatch is in the pipeline. And the next ID production model is the ID.4, based on the ID Crozz concept, expected towards the end of 2020.

The entry-level city car is due in showrooms in 2023. No word yet on which world markets will see the ID.3.

Despite rumours of problems with the car’s software, Volkswagen plans to deliver 30,000 units of its new ID.3 battery-electric hatchback starting in a few months.

VW claims that ownership costs for its ID.3 — in Europe, where fuel prices are generally higher — will be lower than for a comparable gasoline-powered vehicle.

The ID.3’s price would be €2,470 ($2,743 U.S.) less than the e-Golf based on the Mk7 Golf platform, and €3,360 ($3,731 U.S.) less than the new ICE-powered Mk8 Golf. On top of that, Volkswagen believes owners will save roughly €840 ($933 U.S.) per year thanks to lower refueling and insurance costs, and not having to pay for oil changes or the road vehicle tax. The savings come with packaging benefits, too. The MEB-based electric car is almost an inch longer than the new Golf and 0.8 inch wider, on a wheelbase that’s 5.7 inches longer. The wheelbase translates into rear passenger legroom equivalent to a Passat, although that takes a chunk out of cargo room with the rear seats up — the ID.3 can swallow 13.6 cubic feet, the outgoing Mk7 Golf holds 17.4 cu. ft. 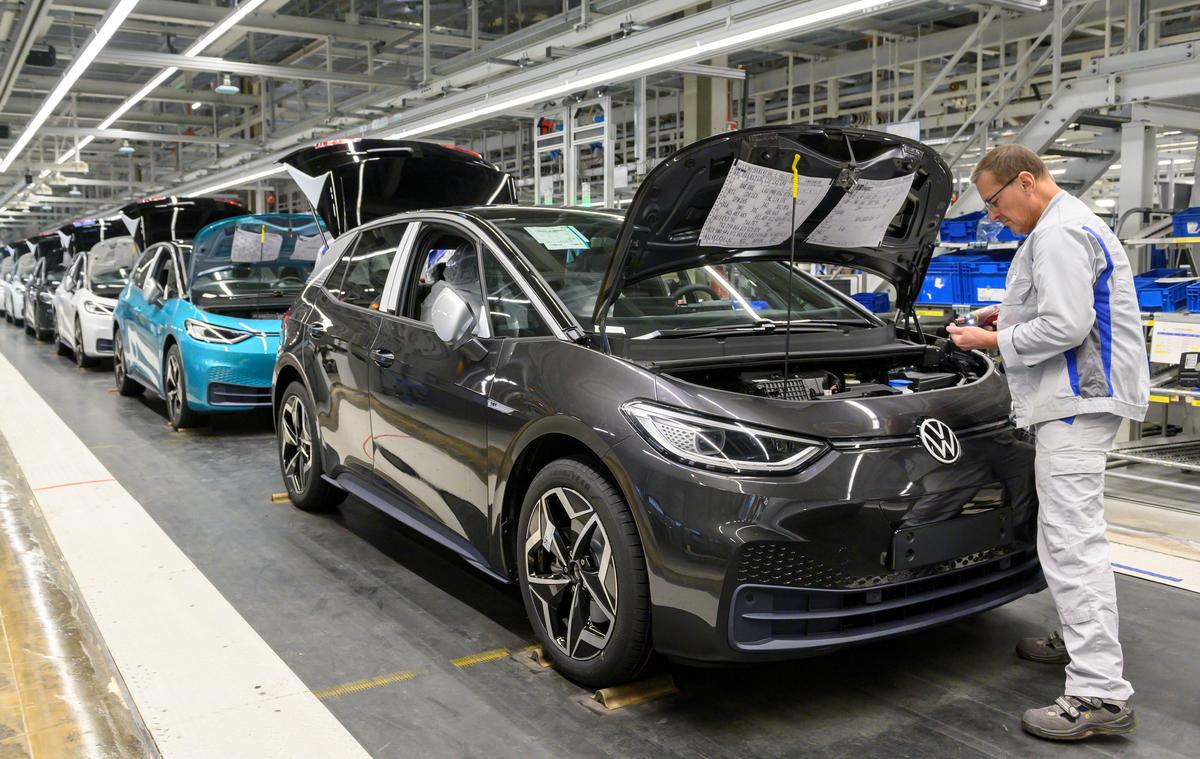 Next generation cars will be equipped with software, sensors and processors that enable vehicles to anticipate and avoid accidents, and to keep learning new reflexes, the German car brand’s strategy chief Michael Jost said in Berlin.

The new software-based vehicle operating system, which is being launched with Volkswagen’s new ID:3 electric car, will be continually updated as software algorithms improve, Jost said.

In this video, Autoblog Senior Producer Christopher McGraw describes his attempt to cover VW’s attempt at setting the all-time course record for the Pikes Peak Hill Climb in the electric Volkswagen I.D. R in May 2018. VW beat the previous record by a massive 16 seconds with a time of 7:57.148, making Romain Dumas the king of the mountain in an electric VW.

Volkswagen AG unveiled a prototype for a battery-powered SUV to flank its ID.3 hatchback later this year and play a key role in strengthening the German manufacturer’s global push into electric cars.

The marque’s first fully-electric SUV – dubbed ID.4 – is set to help take output of battery-powered vehicles to as many as 1.5 million cars by 2025, the company said Tuesday in a statement. That’s more than three times as many as electric-car leader Tesla Inc. sold worldwide last year.

“We will produce and sell the ID.4 in Europe, China and the U.S.,” VW brand Chief Operating Officer Ralf Brandstaetter said in the statement.

Photos after the break »
END_OF_DOCUMENT_TOKEN_TO_BE_REPLACED

Volkswagen on Monday said it will stop developing natural gas-fuelled cars as the German auto giant bets on electric engines in the battle to woo climate-conscious drivers.

Although production of existing models powered by the alternative energy won’t be halted right away, “there will be no successors to these cars,” Welsch said.

“It never really resonated with customers,” he added.

≫ Your Mileage May Vary

Search » Your Mileage May Vary

We use our own and third-party cookies to improve your experience of our website. Cookies remember your preferences and track site usage. By continuing, you accept their use.Understood!